In terms of maturity, that is, in every sense of the word.

The photo? Another beach trip. Note that the legs are getting longer, but I still look like a child. Love the car, though. 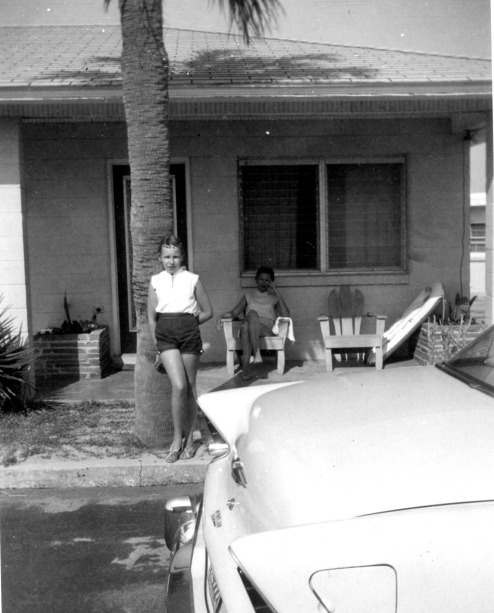 I was, however, a mature pianist. I gave a “senior” recital in October after I’d turned fourteen in September. They even trotted out the high school glee club for this one. It was quite a deal. And then it was over. I didn’t want to take piano any longer. What was the point?

The event of the year was a non-event, actually. (I’m fudging a little in order to write about it, but did happen during my fourteenth year.) Had I gone that night, it might have been one of the most memorable of my life. A young singer from Memphis named Elvis Presley was set to play at the Toccopola, Mississippi, gymnasium on March 29, 1955. (Toccopola was, as we’d say, way out in the county. This was not a major tour. Elvis was just getting his swivel going.) I begged to go, oh, how I begged, but my parents said no. So I missed seeing ELVIS IN PERSON, before he hit it really big.

I have fictionalized that night in a long poem. The venue is no longer a high school gym but a roadhouse. Makes it more interesting, I think. In the poem, not only do I go to see Elvis, but my parents . . . Well, you’ll see.

This edited section picks up in the middle:

not yet the King—

kid from Tupelo with a rag-tag band

and the longest sideburns

I’d ever seen. He sang

“I don’t care if the sun don’t shine,

get my lovin’ in the evenin’ time”

and the crowd was dancing

and screaming and I was screaming

and the back of my neck prickled

and it made me turn and look

and there, across the room,

They did the bop better than any of us kids.

When had they practiced their twirls and turns,

their dips and swaying hips?

When the song ended, even Elvis applauded,

but I looked away. I could not bear

the wild suggestion of my daddy’s touch:

I began to cry,

not for fear of being caught

but because I imagined them young,

I imagined them lovers on summer nights

with all the mysteries I had yet to learn

6 thoughts on “Age Fourteen: Not There Yet”