I pour my heart out about the New Boy, the dangerous one, the one who wants to park on a country road where the kudzu takes on monstrous shapes on a moonlit night. We stay out past my curfew, arriving at the house to find Daddy standing on the porch, watching for me.

Kudzu
Image by LightScribe at iStockPhoto.com

Here’s a bit of fiction inspired by this time, this Boy (from my first novel):

On a sweltering July night almost a year to the day after Terry killed the snake, Lydia and Terry parked in his daddy’s pickup on a dirt road not far from his house. Under the full moon the trees, overgrown with kudzu, took on life.

“Look at that one,” Lydia said. “It’s an angry cat with its back arched. And see those over there? That’s a castle with turrets.”

She poked him in the ribs. “You know what turrets are. They’re those little tops on castle walls.”

“Oh, those.” He leaned across and looked out the window on her side. “Hey, look at that!” He pointed up. “You see the tall one, right there? Looks like it has arms? That’s my daddy coming after me.”

Lydia touched his face. “He doesn’t really do that, does he?”

Quiet except for the kissing and the crickets and the frogs, the call of an owl and an answer deep in the woods, a moth against the windshield, a mosquito’s whine, Lydia’s thrumming heart.

The old Boy is still around, still mercurial. He asks somebody else to be his partner on Dance Party (a teen dance competition televised in a nearby town) and just about breaks my heart. I’m a good dancer; why not me? He and the other girl win, that’s why. He’s in junior college, so he’s not around all the time. He and I go out on Saturday nights and then stay up late in my pine-paneled den, watching horror movies on TV. A life-sized painting of me, dressed in a harlequin outfit, dominates the room. It’s a Christmas gift from an artist-cousin. My mother hates it, my dad hates it, but they don’t have the courage not to hang it and hurt my cousin’s feelings, so we live with that thing. I live with it, this strange, corrupted image of me. But it doesn’t keep the Boy and me from cuddling and kissing on the couch until my dad comes up the back hall to the kitchen with much loud throat-clearing. Then we know; it’s time for the Boy to go home.

Because the Boy has graduated, he isn’t eligible to take me to the prom, so I go with somebody else. This is the date who does not speak three words all night. I try, I swear. He’s a handsome guy (he is the most handsome guy, as I recall, in the yearbook). We have nothing to say to each other. We have nothing in common.

This is not the dangerous Boy. The dangerous Boy is for summer nights. He’s a thrill, an escape from my good-girl life. He has these piercing brown eyes. He exudes heat and light. But I break up with him, and within weeks, he’s dating my best friend. 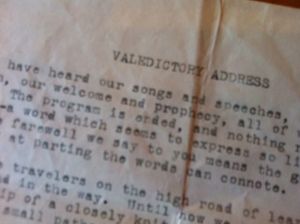 Valedictory address. I didn’t know about cliches then.

After all, I am still the golden girl. I have to measure up. I’m class valedictorian. I’ll be the first person in my family to go to college. A nice scholarship seals the deal: Ole Miss, only thirty miles from home, so I’ll still be tethered pretty tightly. The Boy and I decide to date other people. It makes sense, right?

Do you ever think about the roads not taken–the decisions you made that impacted the direction of your life? Who might you be now, if you had gone down that other road?

This entry continues the October Memoir and Backstory Blog Challenge. Getting tired of hearing about me? I hope not. I’m enjoying exploring these early memories, looking for fiction possibilities.

24 thoughts on “Age Seventeen: On the Cusp”