Around the age of eleven or twelve, a kind of cleansing took place, and my memories are as sterile as the old house became when my mother tried to make it new.

Not long after my grandfather died, my mother decided to remodel the house. Looking back, I suppose it had to do with wiping out those years of sickness and impending death, but she went for a modern look: more or less Danish modern inside a red brick cottage built in the 1920s. The ruffled organdy curtains came down, replaced by sheers. The oil stove, our lifesaver during the ice storm, was removed and the fireplace sealed off. My grandmother’s old-fashioned dining room furniture, including the table I had played house under since I was a toddler, was carted off and replaced by starkly modern pieces. I remember everything as being beige: beige carpet (that was new, too, over old hardwood floors), a beige couch, beige barrel chairs . . . Daddy installed a big, ugly window AC unit in the living room. He bought a television set, and although what we saw on the screen looked like snow, we sat glued to it. Milton Berle. The Howdy Doody Show. Roy Rogers. Kukla, Fran, and Ollie. Ed Sullivan. (There’s a great list of shows of the 1950s at Wikipedia.)

My room changed, too: the wallpaper printed with cabbage roses came down, and the walls were painted a pleasant shade of pale green. Mother had flowered chintz curtains made and a built-in window seat where I loved to curl up and read. I was changing, too, but not fast enough to suit me. I was behind other girls my age who were blossoming. I was still a straight-up-and-down girl, no curves for me yet. 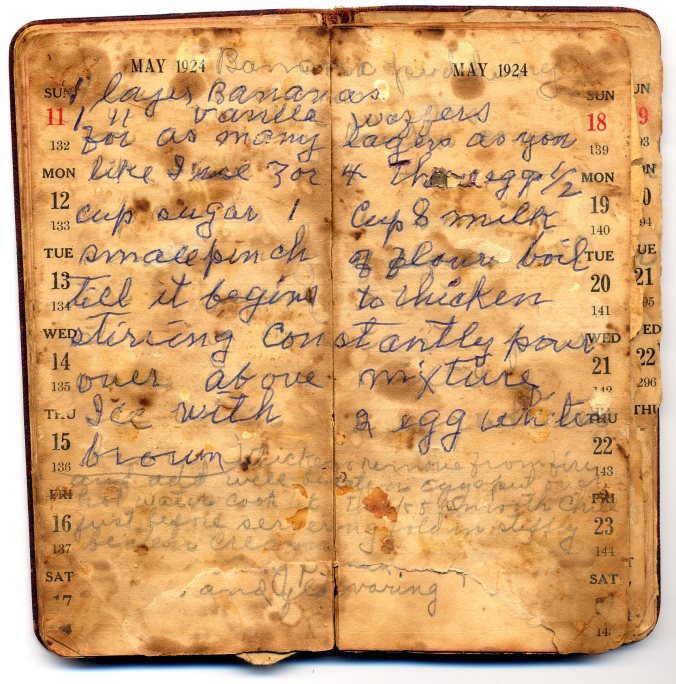 My grandmother’s banana pudding recipe
The ledger is dated 1924.

During those years, my grandmother, not my mother, was the primary cook in our house. She was one of those instinctive cooks–a pinch of this, a handful of that–and she never used a recipe she didn’t modify. I found the handwritten recipe above in a small ledger she kept sometime after the mid-twenties. The ledger contains other recipes and notes and meticulous records of her sales of eggs, milk, butter, and cream to her neighbors. That’s how hard times were. It was the depression, after all. By the time I came along, the cow was gone, and although there are photographs of me toddling around the yard, chasing chickens, I don’t remember them. The ledger is falling apart now, and all the pages deserve to be scanned. They tell the story of my grandmother’s hard life, which may help to explain why life with her became difficult as she grew older.

My mother made over our house, all right, but she didn’t succeed in changing the dynamics of the relationships. My grandmother remained more the mistress of the house than my mother was, although my dad was the true head. It was as though my mother had never grown up; my grandmother treated her like a child. To give you an idea of how complex things were, I called my mother “Mother” and my grandmother “Mama.” At times it did seem like I had two maternal parents. And as I approached adolescence, the complexity of three generations of women under one roof began to take shape.

Do you understand the dynamics of your growing-up household better now that you have an adult’s perspective, or are they still a mystery to you? What questions do you wish you had asked when you had the opportunity?